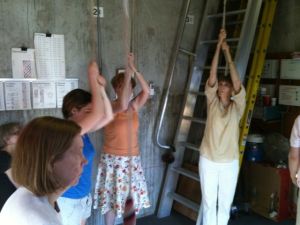 Visitors Cecily (tenor), Jenny (treble), and Sue (2) with Miami ringer Judy (3) ringing rounds. Alex is spotting Bobbie (4) out of sight to the right; Marguerite is on the left observing from the bench.

Most of the band went out to dinner at Wynwood Walls afterwards.